Why My Son Won’t Believe in Santa

My wife and I are three and a half months away from having a son as I write this blog. We are excited, sobered, and looking forward to this new addition to our family.

My bride and I have decided that we’re not going to teach our children that Santa brings them presents at Christmas. We feel very strongly that, while Santa Claus may be a completely harmless person in whom children believe, we want the “magic” of Christmas and the part that overwhelms the imagination of our children to be the incarnation of the Son of God, and not a man that will bring them presents if they’re good enough.

Just to be as clear as possible, I am not and will never judge parents (or to-be parents) that don’t agree with me. And I hope I don’t come off as legalistic or anti-Christmas. Christmas is my favorite time of the year, by far. I love Christmas. I love the lights, the gifts, the joy, the time off from work and school (Hallelujah!), and I myself believed in Santa when I was a child. So before I tell you why Jacob won’t be hearing too much about Santa, I want you to know that I will never judge anyone who disagrees with me. 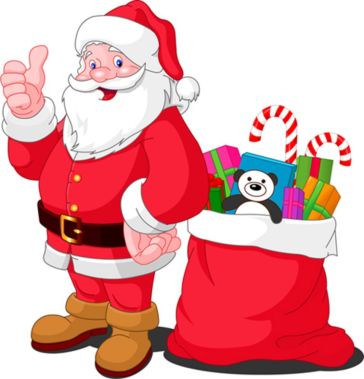 Why no Santa Claus?

I’m 25 years old. I don’t know too much about actual parenting yet, as you might have guessed! And yet, there are several reasons we know that we won’t be teaching our children about Santa Claus…

1). Santa coming down the chimney can overshadow the “magic” of God becoming a man. Which is more gripping to a child: God himself becoming a man 2,000 years ago, or a jolly, bearded man who rides a sleigh with magic flying reindeer, and who will be coming down my chimney once a year to bring me presents?

The story of Jesus being born as a baby still attracts the attention of children, and yet, it seems that most children care much more about Santa and the presents he will bring, even though one of these two stories is true and the other is not. Why let a harmless, yet untrue story overshadow a world-altering true one?

2). Santa is the polar opposite of Jesus. Jesus came to die for the sins of those who would believe in Him, no matter what they ever did or will do. He imparts salvation, faith, and grace to us despite our sin. He loves us unconditionally and gave his life for us. Santa, on the other hand, will bring us gifts…maybe. His gifts are conditional. We must be “good for goodness sake”, not because we’ve been given an eternal gift despite our failures.

Christmastime is a perfect time to teach our children the Gospel. Jacob will receive gifts at Christmas because of the unconditional love that we have for him! We, as parents, can give them these earthly gifts and teach them that, in the same way, Jesus gave them an eternal gift despite their sin. Their obedience, and our acting “good” can come out of an overflow of being amazed at God’s free gift of salvation! Why bother with Santa, when Jesus is better?

3). Santa Claus isn’t real. I hope I’m not too quickly dismissed for saying this, but telling our children that Santa Claus is bringing them presents…is telling them something that’s not true.

I realize it may not scar them for life, as I myself believed in Santa, found out the hard news, and turned out just fine! And yet, even before Jacob can walk, talk, or play, I want him to be able to trust his mother and I in every single way. I want him to be able to believe everything I tell him, and know that I would never lie to him. I want to be the best example of our heavenly father as I can be, so that when we teach him about God, it’s not too difficult for him to imagine a heavenly Father that loves him and whom he can rely on for guidance and truth. This, at least in my estimation, includes never telling my child something that I know isn’t true.

UPDATE: After posting this, I had a great discussion with a parent who said that he and his wife weren’t lying, but “pretending”. I think this is a great point, that it’s totally O.K. to pretend with children. But one question to consider: Do they know you’re pretending? Is it like me and my son pretending to be animals, but knowing that we aren’t actually animals? Or is it our children actually believing that something is happening? If they think it’s real, they’re not pretending.

My main goal in posting this is not to rattle feathers, nor is it to make parents feel bad for telling their kids about Santa Claus. My goal is to share how I hope to take every opportunity I have as a parent to teach my kids about the Gospel. Anything that may distract from that I am willing to give up, even at the cost of having to figure out how to keep my child from telling everyone at school that Santa isn’t real!

My other encouragement is that even if your kids do believe in Santa Clause, don’t make the Christmas presents conditional! Take it as an opportunity to teach them about the one, greatest gift that Jesus gave us 2,000 year ago, a gift that was given “while we were yet sinners” (Romans 5:8).